BELGRADE OF LIGHT
"If the world is what it is, where does the illusion of appearances come from?" - J. Baudrillard

They act as reflections, simultaneously infusing and mirroring each other. In our quest for truth, more often than not we try to take them apart, but the essence evades us. One without the other will simply not persist. In a universe where most of the matter and energy are still mystical and imperceptible – in intertwining, poetical, symbolic, religious, philosophical, cultural, artistic, exact, physical, optical, digital and virtual terms – we interpret LIGHT in countless ways so as to comprehend the illusory nature or reality kept under wraps behind our world’s appearances.

Exhibition of works by two prominent artists, Vollrad Kutcher and Predrag Caranović, entitled “ILLUSIONS”, ushered in week dedicated to the culture of light as part of 2017 BELGRADE OF LIGHT festival. German artist Vollrad Kutcher, easily recognisable by an out-of-the-ordinary artistic sensibility and works in which a repeating subject is a mutual relation between images and imagination, introduced himself with “Shining Role Models”. Serbian artist Predrag Caranović, a master of illusion, light and darkness, showed his “Still Life” sculpture, specially conceived for this exhibition.

From a creative, as well as educational and scientific angle, the “SHIMMERING” programme, designed for children and young people, delved this year in particular into experiments with visual effects and projections and exploration of the phenomenon of persistency of sight and optical illusions. 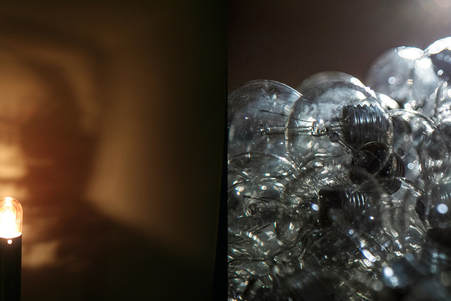